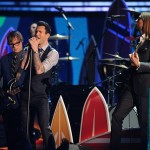 The 54th Annual Grammy Awards (the Oscars of American music) that ended with winner Adele, was dedicated to Whitney Houston, who died less than two days before. The evening which was held in Los Angeles, has opened the ball with Bruce Springsteen & the E Street Band who performed the new single “We take care of our own” dedicating it just The Voice, Whitney, who in 1986 , at 23, on that stage of the Grammys would become a pop icon and soul. The rock band Foo Fighters has swept the awards, Best rock song and best rock album just to name some of those losers. Tony Bennett has won the “Best traditional pop vocal album” thanks to his duet album “Duets II”, where among the many singers in the cd, there’s Amy Winehouse. Kayne West has won in the category HipHop. Regarding the many live performances that were, Coldplay have unveiled their new single “Princess of China” as a duet with Rihanna, then Paul McCartney, David Guetta, Bruno Mars, Katy Perry, Maroon 5.