GET THE ICE CREAM LADY GAGA 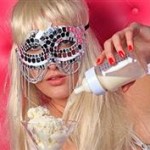 In London, an ice cream maker has decided to offer its customers the shock his latest creation: “Baby Gaga” ice cream made ??with milk and served with cookies for children, a waitress dressed as American singer!
The madman in question is called Matt O’Connor, owner of The Icecreamists “at Covent Garden, that the artisan tradition of Italian ice cream is too stiff for years and we do not know anything new experience … And then he makes the our place. It offers among its ice-cream “Molotoffee” with liquid nitrogen, the “Sex Bomb”, ice cream with a dusting of powdered Viagra and served with a shot of absin the drip in her mouth.
The Germanotta will agree with this ice cream? Knowing we say yes!