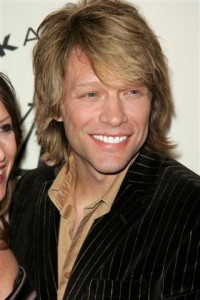 BON JOVI plucked from TEAM FOOTBALL
John Bon Jovi, owner of the Philadelphia Soul football team, said he spent a fortune to keep the team. He said comparing this to another member of the band who said to spend a lot on drugs. But Bon Jovi responded by saying that the amount spent by Mr x the drug is nothing compared to what he spends to keep the football team.

The QUEEN TO COLLEGE

JUSTIN what are you doing?