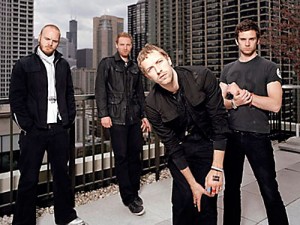 Coldplay are a British alternative rock band formed in London in 1997. The band consists of Chris Martin (vocals, keyboards, guitar), Jonny Buckland (guitar), Guy Berryman (bass) and Will Champion (drums, vocals). Coldplay reached worldwide fame with their single Yellow, featured on their debut album Parachutes (2000). The song quickly became a hit in July 2000 and came to place in the fourth position of the individual classfica British. Their second album A Rush of Blood to the Head (2002) marked their consecration and allows the band to gain recognition around the world. The album stood directly at 1 instead of the UK Albums Chart and # 5 on the Billboard 200. Their subsequent publication, X & Y (2005) received a cool reception from critics, but he still managed to keep the pace of sales of previous albums. With their fourth studio album Viva la Vida or Death and All His Friends, driven by hit Viva la Vida and produced by Brian Eno, the band got many favorable reviews, in addition to winning three Grammys. Coldplay with their fourth studio albums have reached the milestone of 50 million total albums sold.

Ester: Ariana Grande Special guest on POP NEWS Today (08 Jan, 19) we have dedicate the episode of POP NEWS to a young but now great artist: Ariana Grande.  Ariana was born in Boca Raton, Florida. Since she was a child she was passionate about acting and singing, has now climbed the world rankings. Today we want to remember some of her songs and videos starting from what she herself considered a flop: "Put Your Hearts Up". Ariana has Italian origins, her great-grandfathers Antonio Grande and Filomena Lavenditti emigrated in 1912 from Italy to the United States. Ariana has a Read more

The band was formed in 1996 in Agoura Hills, California. They became well-known internationally in 2005 with the release of their album, 'Hybrid Theory', which was a certified Diamond record album by the Recording Industry Association of America (RIAA). The group was originally made up of Mike Shinoda, Brad Delson, and Rob Bourdon. They were three high school friends who shared the same musical ambitions. They soon decided to form a band which they then called Xero and then went out to recruit David Farrell, Joe Hahn, and Mark Wakefield. Just like with any other bands, they experienced great difficulties Read more

My adventure of Radio & Television in some decade of history.  Ivano Spada @Radio Centro Musica My story begins with the passion for FM Broadcasting, in the '70s and '80s where I founded "Radio Onda Nuova" with some friends like Daniele Milani, Bassignana, G. Galusi, in Sesto San Giovanni (MI) Italy, where I was born. In Rome I worked as a Speaker at Radio Centro Musica and in other radio stations of the Roman Hinterland.                Ivano on the mix @The Crow in the '90s The Read more