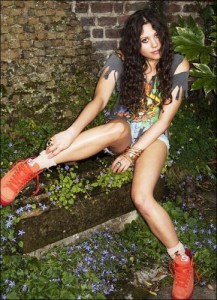 After the great success of this summer ‘Pack Up comes the fourth single of Eliza Doolittle, entitled Mr. Medicine
Eliza Doolittle is a young Londoner, who signed his first record deal at only 16 years, writing songs since she was a girl not yet a teenager, who disturbed his brothers with his passion for singing, and singing for what today the world comes out of his mind and his pen.
Also good to perform his songs live radio, accompanied only by his guitar, he has published so far only one album, Eliza Doolittle, already certified platinum in the UK, from which all individual traits, and was an instant success lha made ??jump to top the British charts.
Mr. Medicine is the magic of love, which scares away all the fears, the fears of all ages, in this case, the fears are typical of adolescence, whose killing is to take the first step towards the adult world.
In fact, video Eliza sings blithely, thinking about his new love, The man who is hailed as for her, because it is a genuine medicine, vitamins, and leave behind the characters of his fears of the bad fables.

BOB DYLAN BACK IN ITALY

Bob Dylan returns to Italy. The legendary, and now 70-year-old Bob will be on stage in Italy at Alcatraz in Milan on June 22. Present the public with a selection of their Italian classics that could include such masterpieces as "Lay, Lady, Lay", "Tangled Up In Blue," "Highway 61 Revisited," "Ballad of a Thin Man" and "Like a rolling stone." Tickets will cost the modest sum of 60. The next will be in stores April 12 "Bob Dylan in concert - Brandeis University in 1963, live album that documents the artist's exhibition at the University in Waltham, Massachusetts, in the Read more