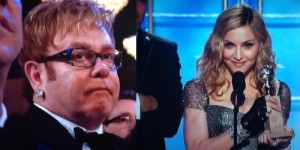 Madonna against Elton John, even Madonna against Elton John. Golden Globes 2012: The “Lady Ciccone” with surprise wins the award for best soundtrack with the song Masterpiece of the new film ‘WE’ soundly beating Elton John, who was nominated for his collaboration with Lady Gaga’s song “Hello Hello” in the film ‘Gnomeo and Juliet’, “I hope that you speak to me again for the next two years.” ‘It is well known that I do so angry,’ said the pop star at the end of the ceremony.  The queen of pop and the British singer, of course, have had several in the past hostilities. Before the Golden Globe, an Elton John very sure of himself, has made ??it known to be certain that his rival, he had no chance of winning the prize. When it was announced the opposite of what he had said, the cameras have framed his face turned to stone.