MADONNA VS ELTON JOHN: THE TRUCE 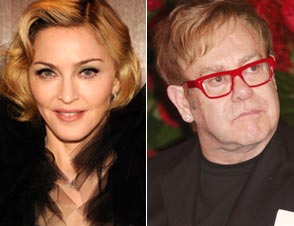 MADONNA VS ELTON JOHN: THE TRUCE
Elton John and Madonna have made peace? According to their last meeting seems to be yes. The two were found by chance in the same restaurant in the south of France where they were surprised chatting and exchanging ironic. The historic singer has recently raised much controversy after insulting the Queen of pop calling it ‘a stipper circus’. In turn, the singer replied during a concert kicking off a feud without end. Randomly Madonna was there for a quick bite before a performance. According to the sources’ Elton John when he was leaving he stopped to talk to Madonna. The two laughed and chatted as well as embrace ‘.

GEORGE MICHAEL AFTER THE DISEASE