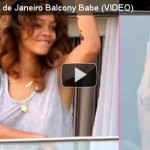 [youtube]http://youtu.be/cqs4fMwW6hA[/youtube]RIHANNA NATURE FOR ALL FANS

Rihanna has done to his Brazilian fans a special surprise when, early in the morning was in pajamas looking out from the balcony of the hotel where she was staying. The singer, 23, was awakened by the call of the crowd that had gathered outside the hotel waiting for her, and when it was the balcony, it was not shown at all annoyed. Seems to have simply got up and showed up wearing a gray pajamas so short as to leave little room for imagination. Without snobbing, the star said goodbye to his fans by showing no makeup and her hair tousled from sleep. Back in the room did not fail to send kisses to her admirers. The singer is in Rio de Janeiro as the first location of his world tour “Loud”. He recently worked with Coldplay last album of the band and announced that the next single (from the new album) to be launched is called We Found Love.

Hello everyone from Daniele Milani, my new MICROMIX mixed songs this week is the first of a new series that "dust off" the first decade of year 2000 music that is what we at V2BEAT call "Lost Music hits". In this micromix you will hear: Kelly Rowland, Kylie Minogue, Bruno Mars and finally Rihanna. Have a good listening!. New Micromix of selected songs this week which includes 4 tracks on year 2000 music Kelly Rowland Keep It Between Us 1 - Kelly Rowland - Work (Freemasons Remix) 'Kelendria Trene Kamasia Rowland', known as 'Kelly Rowland' (Atlanta, Read more

Riri came out with a new collection of sexy underwear for the Valentine's day. In addition to perfumes and a thousand other things, Riri is not just dedicated to music. The singer has recently launched both a make-up and a lingerie line. We are sure it will be a successful collection. a preview of the collection the fans have already seen it on the instagram profile. Also in this case, as for make-up, the basic idea is to "please" all women, with sizes suitable for even the most curvy, in fact from the photos we are noticing how the ass Read more

LP (AKA Laura Pergolizzi) returns with a new single. The extravagant singer returns to the recording scene with a song called "When I'm Over You". More and more 'untidy and apparently disordered, it seems that he has never seen a hairdresser and that in the morning combs making explode a firecracker on her head. However, we remember her as an American singer with Italian descent, songwriter for many well-known names including: Cher, Rihanna, the Backstreet Boys, Leona Lewis, Mylène Farmer and Christina Aguilera. So we listen to her in her latest work ... from this week in rotation on V2BEAT Music Read more

FRIENDS REALLY? RIHANNA AND KATE PERRY Rihanna and Katy Perry have become good friends. The singer of Barbados admire the individuality of the links around and argues that it is a real joy. 'Katy is a legend. I love it. When I met her for the first time was like breathing fresh air, 'she told Glamour magazine. 'It was everything I wanted to be. Katy gets on stage and do what he wants. Dresses as she likes best and says what comes to mind. Now I do it '.   Marco Guarino