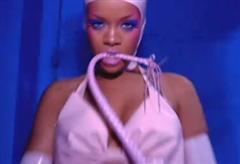 What has made this time so outrageous Rihanna? It ‘s just released his new single which is called S & M. The song is the third single from “Loud”, the album topped the charts all over the world that has already sold 2 million and 800 thousand copies. In the video Rihanna is S & M version with whips, ironically while playing with inflatable dolls and provocative when he eats bananas, is angry with the press and journalists in particular (special guest blogger Perez Hilton is the version with faithful dog the singer who takes him for a walk on a leash) that deal with gossip guilty of inventing the strangest stories about her. But have helped to make famous.