The One Direction are the phenomenon?

THE PHENOMENON OF THE MOMENT: “ONE DIRECTION” 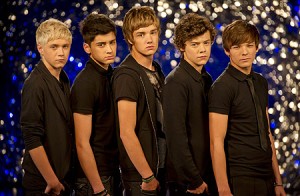 The One Direction are the phenomenon of the day: five English boys who come from the talent show X Factor UK 2010 and now have topped the charts all over Europe. Young, pretty and wild, have been able to shake the world with 55 million web views of their first song What Makes You Beautiful. The Facebook page of the boyband formed has more than 2,500,000 friends on Twitter and the boys can boast 1,700,000 followers.
These “new Take That”, as some have already nicknamed dared, for now do not you mount the head by the superstars. They travel by train and get excited when you withdraw the award for Best Single at the Brit Awards, despite their debut album Up All Night is ready to conquer the American market, where it is output to mid-March.