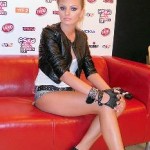 Alexandra Stan was born June 10, 1989 in Constanta, Romania. It is recognized in the Faculty of Economics and Management. In 2009 he published Show me the way, Energy and Lollipop, known as Lollipop (Param Pam Pam), but have not had much success.
In 2010 Mr. Saxobeat produces the individual. The song reached the highest position in the Romanian Top 100 December 12, 2010, becoming her first single at number one. Next Public Get Back (ASAP) and 1,000,000, the debut album Saxobeats advances, released in summer 2011.
Website http://www.alexandrastan.ro/